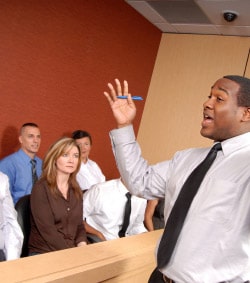 What Is A Jury

A jury in a criminal trial in Maryland is composed of 12 random citizens from the County in which they reside. Anyone who is registered to vote or has a driver’s license with an address in that County is eligible to be in the “jury pool“.

How Is A Jury Selected

Before the jury is picked, the Court will conduct a “voir dire”, meaning asking questions of the jurors to decide if the can be fair and impartial. Jurors may be excused by the Court “for cause” because they know one of the witnesses, decided what happened before coming to Court based on seeing something on TV about the case, or just admit they can not be fair to one side or the other.

After the 12 jurors are selected, the Court will also pick alternate jurors. The number of alternate jurors depends on the expected length of the trial. The longer the trial, the more chance a juror will get sick or have something happen to them to cause them to not be able to continue as a juror, so the more alternates the Court picks. The alternates sit with the jurors and hear the entire case, including the closing arguments. But, they are not allowed to participate in the deliberations of the jury and are generally released after the jury begins deliberating. If a juror is unable to continue before the deliberations begin, an alternate replaces them.

What does a jury do?

A jury decides, based on the facts they heard, what happened. While the Judge makes legal decisions, like a baseball umpire calling balls and strikes, the jurors are the finders of fact. They talk amongst themselves and use their collective memories to decide what they think was true and what actually happened. Then, they apply the law explained to the by the judge and apply the law to what they believed to be true. In the end, they vote guilty or not guilty. Sometimes, they vote multiple times. A jury must be unanimous, so every one of those 12 jurors must agree. If even one disagrees, the Court can eventually declare a mistrial and the process will start over for all the charges the jury could not agree about.