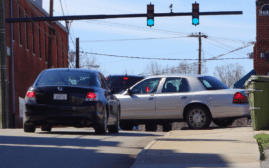 The most concerning issue for many people after a car accident is recovering money to pay for their medical and property damage bills. However, if you file a lawsuit against the at-fault party, be warned that your case may be in jeopardy if you are found to be partially at fault. The following reviews what you need to know about car accident negligence in Maryland:

Maryland is an at-fault car insurance state, which means that a driver who causes an accident is responsible for paying for it (most commonly, through that driver’s car insurance policy). As such, if you are involved in an accident that is caused by another driver’s actions, you have three options:

When You Are Partially at Fault for Your Car Accident

If you are partially at fault for your car accident in Maryland, you may be completely barred from recovering compensation for your injuries from the other driver. This is because the state of Maryland still maintains — in the opinion of many, very harsh — contributory negligence laws. Under these laws, a person who contributes to their injuries through their own negligence is thereby prevented from seeking compensation, even if that degree of fault is minimal. The Legal Information Institute of Cornell University Law School explains that recovery is barred “even if the negligence of the defendant was much more serious.”

Other states implement a comparative negligence rule, in which a plaintiff’s compensation award is diminished in proportion to his or her degree of fault. In the past, there have been proposed changes to the Maryland law, although the highest court in the state has upheld the contributory negligence statute (See: Maryland’s Highest Court Upholds Contributory Negligence Law in the Insurance Journal).

It can be very difficult to prove that the defendant was 100 percent at fault for your injuries — in fact, even failing to wear your seatbelt is considered to be contributory negligence in Maryland. If the defense can prove that you did anything that contributed to the accident’s occurrence, or the incurrence of your injuries, you will be unable to recover compensation.

Examples of Contributory Negligence in a Maryland Car Accident

If you are still unsure of what contributory negligence is and how it may apply to your case, consider the following examples:

2. Another driver is following too closely behind you. As you approach a stop sign, you begin to brake and slow your vehicle in preparation for stopping. However, before you come to a full stop, the vehicle behind you slams into your car, causing your airbags to explode and break your nose. When you pursue a lawsuit against the driver, however, it is discovered that your brake lights were out, that you knew that they were not working, and that you failed to get them fixed. As such, the defense argues that the driver behind you had no knowledge of your intent to stop and cannot be held 100 percent liable for your injuries, even though the driver was following too closely.

3. You are traveling through an intersection where the speed limit is 45 miles per hour. Your speedometer shows that you are traveling 52 miles per hour, but you are not worried about it because you are keeping up with the flow of traffic. As you cross through the intersection, a drunk driver — who you later find out has a blood alcohol content well above the legal limit of .08 percent — T-bones your car. Your injuries are severe and cause permanent and lasting impairment. However, because you were speeding at the time of crash, contributory negligence bars you from recovering damages from the drunk driver.

The Importance of Proving Fault

As you can see from the examples above, car accident negligence is a very serious thing in the state of Maryland. Further, the importance of proving the absolute fault of the responsible driver is essential in order to receive the money that you need to pay for your injuries and losses.

However, proving fault can be difficult. In order to prove fault, you will need to gather the right evidence and conduct a thorough investigation. Types of evidence that may be useful to your lawsuit include:

● Medical evidence documenting your injuries as well as how they may have been incurred;

● Evidence from the scene of the accident, including skid marks, debris, traffic signs, posted

● Any video footage that may have caught the accident on camera.

Pursuing a car accident lawsuit can help you to recover the compensation that you need to reimburse you for medical expenses, lost wages, the value of your pain and suffering, and other noneconomic and economic losses. However, if the defense can prove that you did anything at all to contribute to your damages, your lawsuit will be futile. For this reason, it is essential that you have an experienced car accident attorney on your side who will work hard to gather all of the evidence that is essential to holding the other driver liable, and who can present a strong case on your behalf.

At Jimeno & Gray, P.A., we have just the car accident legal team that you are looking for. For a free case consultation, contact us at your earliest convenience.