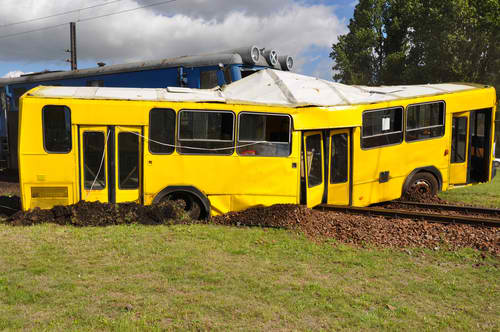 Buses are supposed to be safe. In fact, many people who ride buses do so out of precaution. Driving yourself around in a smaller vehicle on busy Maryland roads puts you in danger of becoming injured in a crash, but riding on a bus is a safer alternative, right? Unfortunately, this isn’t always the case.

More and more Baltimore bus crashes are occurring. Although the causes of the accidents are not always known, they always put their passengers in danger. Many bus accidents have occurred recently. Here, a Maryland bus crash attorney takes a look at some.

A Baltimore County school bus crashed into a tree on June 13, 2014.

Officials say the accident occurred at 6:30 am at Hilton Road near Dorchester Road in the northwest part of the city.

The front of the bus collided with the tree and a black SUV was also involved in the accident. One student on the bus was taken to the hospital for a headache that occurred after the collision.

It is unclear at this time why the accident happened and who was at fault.

No students were on the bus at the time of the accident and the bus driver refused treatment at the scene. Two occupants in the car were injured and taken to the hospital with non-life threatening injuries.

The cause of the crash is under investigation.

Crews arrived on the scene shortly after 4:30 pm. Three people were injured and were taken to area hospitals. One person from each vehicle was injured, and one from the tour bus.

The cause of the accident is now under investigation.

A school bus carrying fifth-grade students from Beers Elementary School was involved in a three-vehicle accident on May 14, 2014.

The students were returning from a field trip to the German American School when the bus they were in rear-ended a Ford Mustang that was stopped at a red light near the intersection of River and Seven Locks roads in Bethesda at about 1:15 in the afternoon.

The Mustang was pushed into the road because of the impact from the bus, where it then collided with another vehicle.

Nineteen students from the bus and one adult were taken to the hospital for treatment of non-life threatening injuries.

On February 9, 2014, a bus driving near the Maryland and Pennsylvania border crashed into an embankment, sending 26 of its 33 passengers to the hospital.

The bus was traveling along a snow-covered Rte. 220 in Cumberland Valley Township, about five miles away from the Maryland border, when it lost control and crashed.

Officials state the bus driver, 65-year-old Terrence Howard Schultz, was traveling “at a speed that was greater than what is reasonable and prudent for the situation.”

The hurt passengers were taken to two hospitals in the area and all but three with minor injuries were treated and released.

Twenty-five EMS units from four counties responded to the crash.

The bus was headed to the Rocky Gap Casino Resort in Western Maryland.

A school bus carrying 11 people overturned in the Pikesville area on October 4, 2013.

The bus was headed south on Greenspring Ave. going to Pikesville Middle School when it left the road and turned over in a ditch.

All of the occupants were able to leave the bus through its emergency hatch on the roof. Six people – five children and the bus driver – were taken to local hospitals for the treatment of minor injuries.

The cause of the accident is unclear, and it is also unknown how the bus turned 180-degrees when it went in the ditch. The bus was found facing the opposite way of the direction it was traveling.

Baltimore bus crashes are surprisingly common. Perhaps the most frightening aspect is that many of the accidents involve school buses. Parents put their children on these buses expecting them to be driven safely and to protect their children. Unfortunately, this doesn’t always happen.

If you or your child has been injured in a bus accident, the lawyers of Jimeno and Gray may be able to help you receive the compensation you deserve. Connect with us today to find out more.

Request your free copy of the book A Crash Course in Maryland Accidents, written by attorney Gregory Jimeno, when you call.